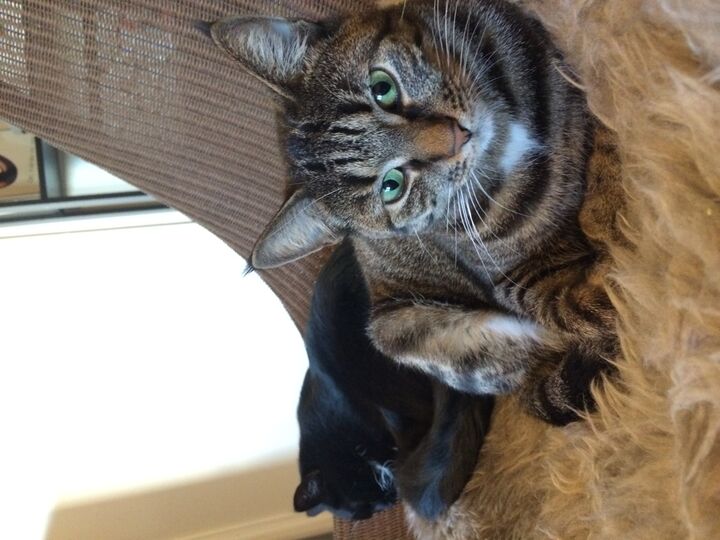 My boyfriend and I adopted out sweet Louis about a year ago. She was very timid in the beginning and she peed on everything!

Throughout the year, we have had to throw away  3 couches, a mattress, rugs, towels and more because she was urinating on everything.... including my very own BACK!!!

We have three litter boxes, two of them are very large. We couldn't figure out the problem. She excessively head butts things and meows so we think she has some anxiety/behaviour problems due to the fact that she is an indoor cat and she has so much energy.

This is was a problem because in the beginning she was too scared to play with us so the anxiety forced her to urinate and mark things inappropriately.  Plus we already had a cat, so that didn't help with Louis being a scaredy cat.

We also took her to the vet and her health is fine.

So how did we solve this???

After about 6 months of just not owning a couch (because she would be on them) and keeping all the doors closed (so should couldn't pee on the beds), we finally realised it was the litter boxes. They weren't deep enough to hold enough litter to her liking.

This and the fact that she is totally comfortable with us and our other cat now.

So if you have a cat that sounds like Louis, give them love, patience, and some deeper litter boxes with more litter in them! And clean them EVERYDAY, ever twice a day, and have as least 1-2 per cat.

Our apartment was probably not clean enough for her. Cats are known for being very keen with hygiene.

Yeah probably! She is so cute now though

To participate in the discussion, you must first become a member. It is quick, simple and free. The membership gives you access to all our communities.